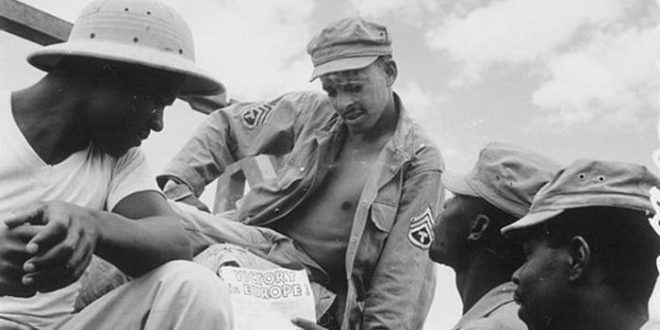 The African and Caribbean War Veterans Memorial was seen for the first time on Armistice Day, 11 November 2014, at the Black Cultural Archives in Windrush Square, Brixton, London. This was an early look at the memorial to Service Personnel from the Caribbean and Africa in WW1 – during the centenary commemorations (1914 – 2014), in which there was very little general acknowledgment of their contribution to that ‘Great War’. Now it will have a permanent place of honour in London.

As we go to press, the count down to the opening of this historic African & Caribbean War Memorial has been running for 39 days and there’s just one more day to go! The concerted efforts of  The African and Caribbean War Memorial initiative, administered and managed by the Nubian Jak Community Trust, has ensured that a lasting memorial to the legacy exists commemorating soldiers of African descent, who fought alongside British troops and their Allies in World War I and World War II. 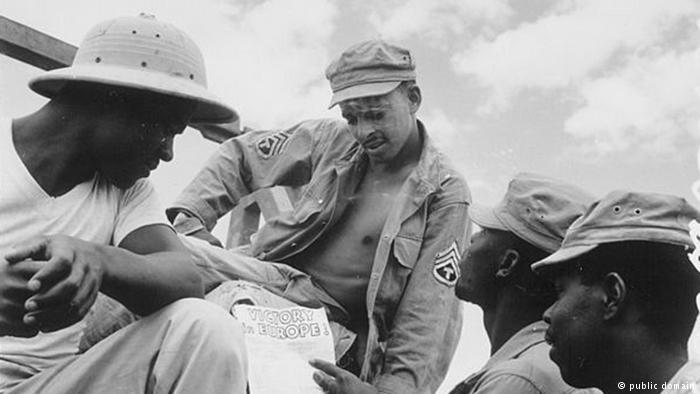 The African and Caribbean War Memorial is the first of its kind in the United Kingdom, made up of two obelisks in Scottish Whin Stone – erected on to a 12-foot pyramidal plinth weighing just over 5 tons. I has been installed in Brixton, London and will be unveiled on 22nd June 2017. 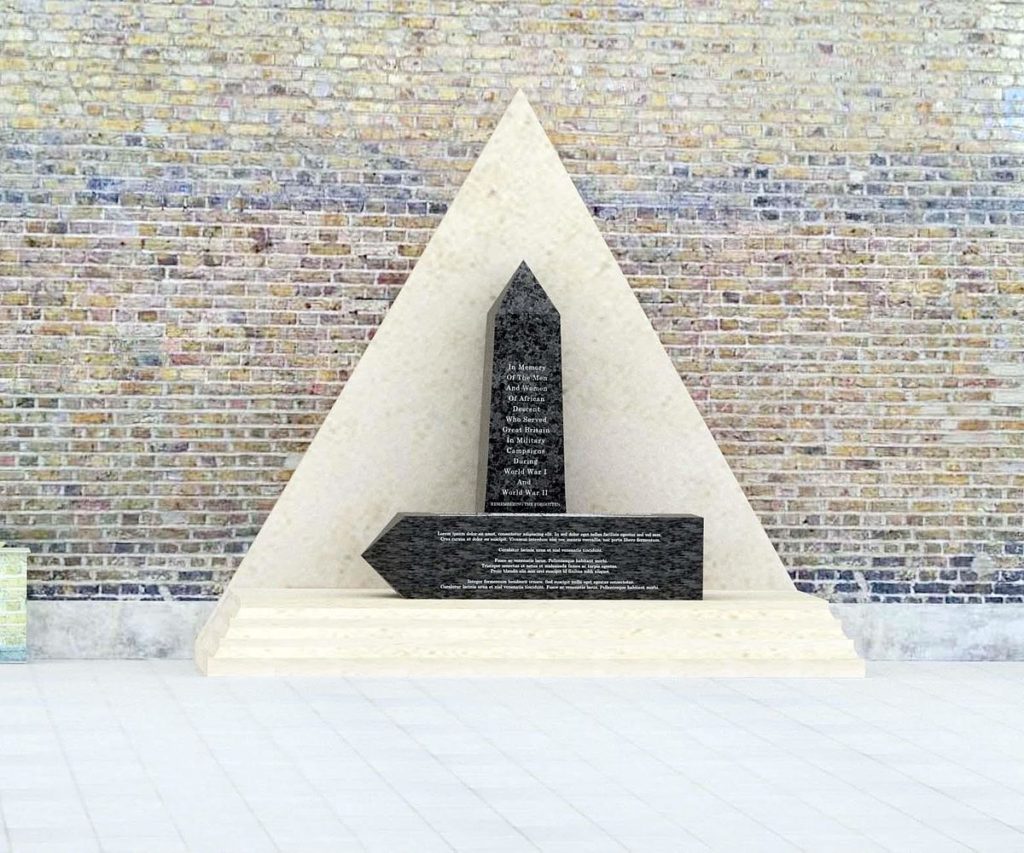 Originally conceived by the Nubian Jak Community Trust, the project has been three years in the making, as an extension of the 36 blue plaques installed around the country, commemorating iconic black figures in the United Kingdom’s history.

George Africanus was brought to England as a slave from Sierra Leone at a young age. He first was taken to Wolverhampton where he was taught to read and write and became an apprentice to a brass founder. In his adult years he moved to Nottingham, married, and set up his own business – an employment agency for servants which ran for more than 70 years. He is buried at St Mary’s Church, Nottingham.

The Nubian Jak Community Trust’s mission is to ensure there is a lasting legacy honouring the contribution made by African and Caribbean Military Servicemen and Servicewomen as well as addressing the historical omissions that have been made about their participation.

Her Majesty, Queen Elizabeth II, in a letter of support to the Nubian Jak Community Trust said

“It is now over 70 years since the end of that war, but it is just as important to remember the ultimate sacrifice made by those men and women who were prepared to lay down their live for our freedoms.”

The Memorial’s unveiling and installation ceremony will take place on 22nd June 2017, Windrush Day, a day particularly fitting for this distinguished occasion. Windrush Day is a day of great significance to all British Nationals of African and Caribbean descent marking the arrival of the Empire Windrush in 1948.

Tickets for the event are free but you must book, as there will be cordoned off area for pre-registered attendees only. Book your tickets via Eventbrite for– REMEMBERED – Unveiling of the African and Caribbean War Memorial at Windrush Square, Brixton, London from 2pm to 4pm

“This memorial event will be a poignant yet celebratory experience and inspirational for all who attend. It is crucial that we don’t forget the historic role played by African and Caribbean Servicemen and Servicewomen who served during both Wars.  We should be proud of their contribution.”

“Britain owes an enormous debt to the African and Caribbean service men and women who fought alongside their British- based peers during the First and Second World Wars.  These brave individuals, who came from what was formerly the British Empire, sacrificed an enormous amount to defend the freedoms that we now enjoy.”

This project has been partially funded by the Department of Communities and Local Government, Lambeth Council, The Heritage Lottery Fund as well as many generous private donations.
It’s vital for black community organisations, including publications, to keep growing, and become curators of their own culture but we can only do that with your support!

Great musical talent such as Eric Roberson have supported the Nubian Jak Trust with African and Caribbean War Memorial project. You can also support by downloading a reggae influenced remake of Eric Roberson’s beautiful track “I have a song” , produced by Fred Rosser (from the movie ”Prison Song”) off  his album ” The Vault Vol. 1.5″.

Download the remake featuring Jak Belua and Eric Roberson for 99p via itunes, especially recorded to commemorate this remembrance event and raise funds for the charity to continue its work.

Watch the video which also has a cameo appearance by Alan Wilmot, born in Jamaica 1925, who volunteered to serve in both the Royal Navy and Royal Air Force. Also, a member of a successful 1950’s group called the Southlanders who had recorded a number of UK hits.

The African and Caribbean War Memorial Event will be followed by a World Celebration Concert at the Prince of Wales in Brixton. 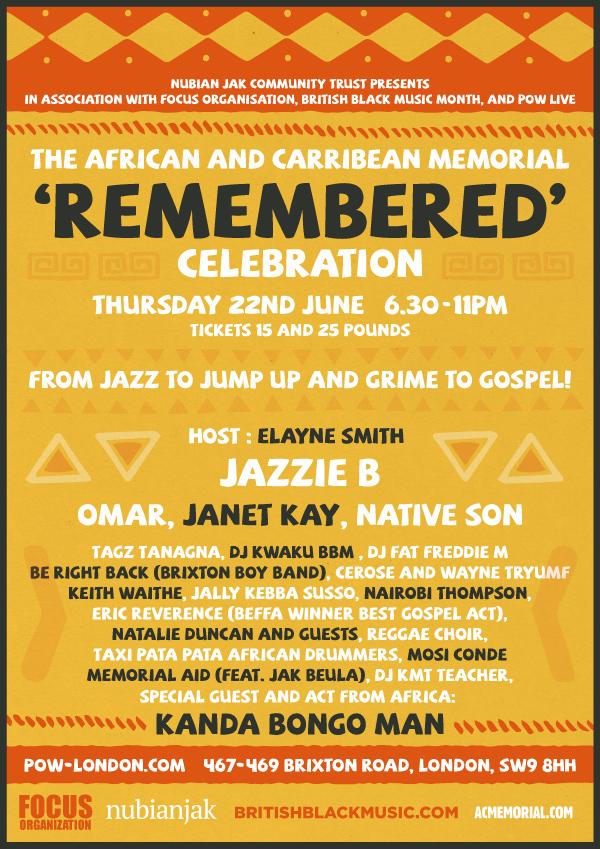 Sharing is caring…here you’ll find further reading/knowledge links, I came across whilst researching for this feature.