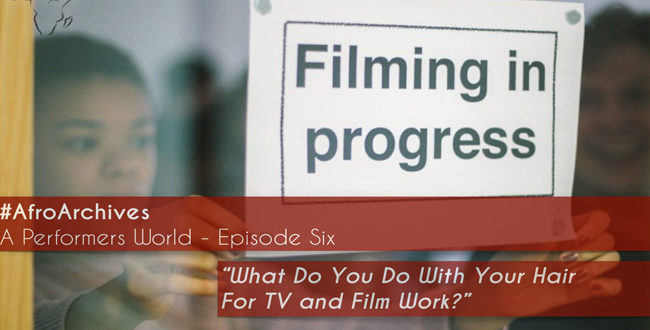 What Do You Do With Your Hair For TV/Film Work?

The way films are made can involve scenes being shot out of sequence, re-takes over a period of time and a key part of the filming process becomes the issue of continuity. Hair is therefore very important because it needs to look the same as it did on previous takes.

Afro-textured hair requires a different type of hair care and informed attention to styling than other ethnic groups. The manipulation with straighteners and blow-dryers damage the hair by harming hair cuticles. Chemical straightening (hair relaxers) physically and chemically change the hair fibre by opening the hair shaft, which makes the hair strand vulnerable to damage not to mention the damage to the scalp, and that relaxers are said to be toxic. The severity of the health risks that chemicals expose us to are still being discovered. Our afro-textured hair has been a grave and living experimentation going beyond our hair to our bodies and general well-being.
The seriousness cannot be under-stressed, and there’s lots to learn and know, examples being texture and porosity and how race determines these hair characteristics. An article in the examiner.com explores these issues as well as consideration to hair care & products >>

Press play on #AfroArchives episode six, which asks: What do you do with your hair for TV/Film Work?

The fundamental issue is that the types of styles needed for afro-textured hair to be protected over longer periods and to promote healthiness are styles such as up-dos, braids, twists and dreadlocks. But these styles are not common on our screens and they are not often embraced as images of beauty in the UK. It becomes a serious issue for working on TV and film. Seeing role models with natural hair, in styles that are realistic and manageable is important for embracing and accepting our hair. Not to mention that it would be good to be given inspiration for hairstyles.

Hairstylists on set are more used to dealing with European hair. Actress Holly McFarlane on Afro Archives part two of episode 5 described her experience of being in hair and make-up as a good one, of finding it exciting to see what the hair artist might do, making it slightly different to what she might do. Contrast this with the actresses with afro-textured hair, who find that the make-artists tend to do nothing with their hair, just pat it down a bit. Actress India Ria Amarteifio puts a call out, she asks that make-up and hair artists on set “step over the boundary and do something else”. When it comes to continuity, it would help.

Coming up in Afro Archives Episode Seven, we’ll be hearing from the men!

Next episode of #AfroArchives Seven, released on 29th July, “Does Your Hair Affect Preparing Character Parts For Auditions?”

If you missed the introduction to Afro Archives catch up here.  Let’s keep chatting hair.