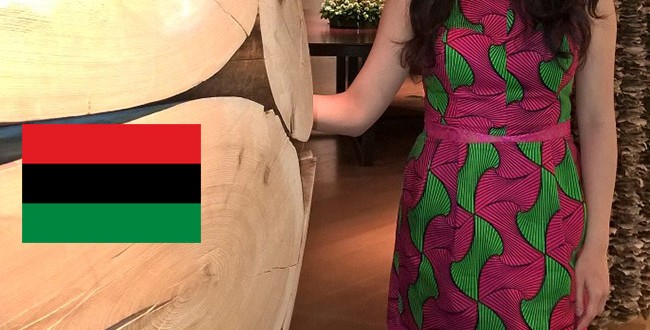 Hearing about how African fashion is impacting the furthest reaches of the planet, we journeyed a day and a half to Taipei in order to meet with designers that are leading the way by opening new markets to Africa’s freshness and vibrancy. In the 1,671 foot shadow of the Taipei 101 tower, we met with Amy Ku.

While Taipei may share temperatures that are comparable to much of Africa, the differences end there. Taiwan is constantly shaken by earthquakes, while the African continent remains relatively stable. At the same time, Taipei often experiences torrential downpours – with up to 30 times more rain falling than most of Africa’s 55 countries.

With so many geographical and cultural differences, we asked Amy where her interest in African fashion began.

“It started when a friend gave me a traditional Gambian dress”, she explained. “It was loose fitting and had a gorgeous tie-die pattern”.

“I then adapted it to my own style, turning into more of a spaghetti dress and everyone fell in love with it”, said Amy. “I guess my direction as a designer was set”.

Amy’s origins are Hakkan. Although they originated in south east China, they are more closely associated with the Pacific Islands. It looks as though Amy’s ancestors were always looking for something new across the water.

Here’s a shot of Amy, modelling her Leah Wax Print Lace Insert Dress in the lobby of the Taipei Grand Hyatt. This particular design retails at $178:-

As trade between China and many African countries continues to develop, so the cross-overs in terms of culture and style are also likely to develop. We asked her to explain what styles most influence Taiwanese fashion and how she intends to open the market.

“We are heavily influenced by European, Japanese and Korean fashion”, she explained. “There is something about the Taiwanese mentality that says clothing and style from these areas will be more readily accepted. Rather than pushing against that trend, I have integrated it into my long term marketing strategy”.

“I had been working on Africa-inspired clothing for a while before I came to the UK for African Fashion Week London“, she told us. “That’s when I realised that showing my designs in London this summer is the perfect way to open up sales into Taiwan. If my work is accepted in the UK, then it has more chance of being accepted in Taiwan”.

Taipei 101 dominates the city’s skyline and it was prevalent in the photography for her summer collection last year.

In the second part of our interview, we will be asking Amy about her production methods and long term goals for the brand.

For now, we will finish with a question that has been in our minds from the first time we saw the brand – why the different spellings?

Amy laughed and revealed, “It was a combination of two things: The Aimee spelling will resonate better with Taiwanese consumers and the web address was more readily available”.