For the last eight years we’ve watched how Michelle Obama’s style and taste can shape a presidency – and one of the most interesting articles I’ve read to date about Michelle’s impact on the fashion industry is by Vanessa Friedman of the NY Times.

‘There is simply no ignoring the fact that during these two terms, clothing played a role unlike any it had ever played before in a presidential administration.’

Chimamanda Ngozi Adichie’s thank you note to Michelle, perfectly encapsulates moments during the past eight years that Michelle quietly and confidently changed the course of American history, whilst becoming a style icon.

”She had become an American style icon. Her dresses and workouts. Her carriage and curves. Toned arms and long slender fingers. Even her favored kitten heels, for women who cannot fathom wearing shoes in the halfway house between flats and high heels, have earned a certain respect because of her. No public figure better embodies that mantra of full female selfhood: Wear what you like.”

Beyond her natural beauty & elegance, her choice of designers proved she was committed to wearing emerging designers as well as the big names. She’s worn outfits by several African designers inc, Maki Oh, Duro Olowu, Mimi Plange. Slaying fashion from Africa in both a classy and casual way. 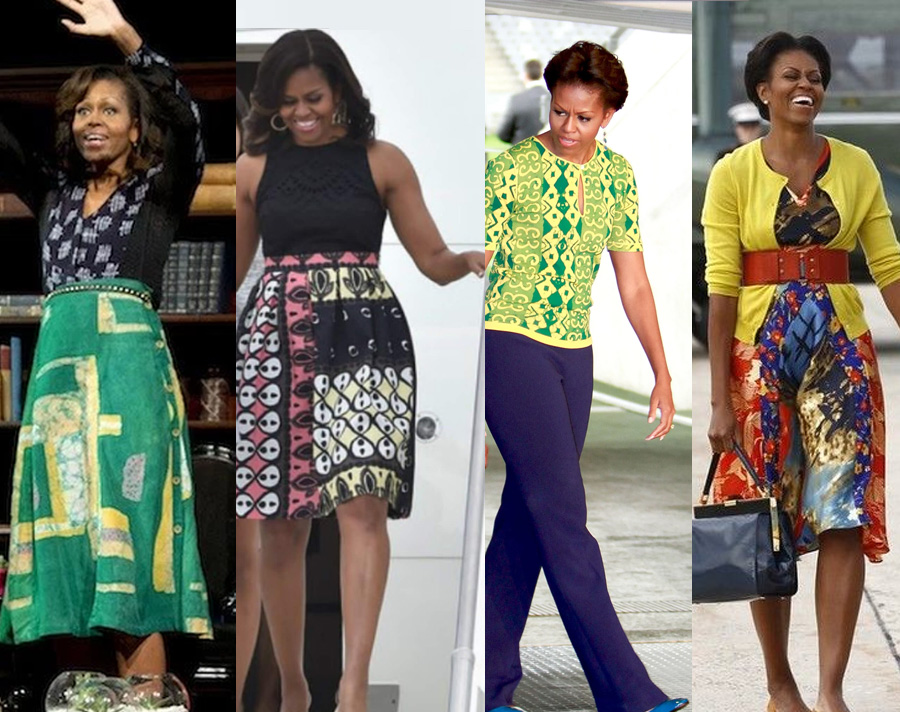 While tradition dictates that Barack will be called ‘President’ for the rest of his life, his wife is no longer the First Lady. Watching the ultimate black power couple boarding Marine One for the last time, commentators from the world’s news agencies kept correcting themselves when speaking about Michelle. She has brought such grace, intelligence and warmth to the role, that it will be hard to ever think of her in any other way.

After a short holiday, the most famous black family in the world will stay in Washington, in the district of Kalorama, until their daughter Sasha ends high school in 2018.

It’s been a pleasure to watch Mrs Obama for eight years. We’ll miss her style on our screens, her down to earth media appearances and infectious personality. A role model to so many girls & women, with her genuine caring belief system in empowering girls all over the World. Speaking about the global and personal dimension of advancing girls’ education at the World Bank Group on the 13th April 2016 (for the Let Girls Learn meeting), her words were deep from the heart…

By 2020 the World Bank Group expects to invest at least $2.5 billion in education projects targeting adolescent girls (ages 12-17). This kind of investments has certainly been encouraged by her words. You can read Michelle’s full speech here.

Naturally, the history books will write extensively about her being the 1st black woman at the helm of the White House. She’ll be admired by many for not being afraid to speak about serious issues of race and civil rights. She’ll be defined by her work championing healthy eating, exercise and education as a priority for girls. She was the total package – a fun, sincere and glowing mum & 1st Lady oozing intelligence.

Sharing her experiences with women, she constantly reminded us all that “It’s okay to be who you are”. It’s a phrase often used but, when spoken by Michelle, it carried so much power. So much truth. If ever you need a ‘pick me up’ – to help you strive toward your ambitions – we encourage you to seek out a speech from Michelle on YouTube.

”Something better is always possible, if you’re willing to work for it” – Michelle Obama

The Obamas share a quick tender moment on the Capitol steps before boarding Marine One for the last time pic.twitter.com/HsI0TkzMiG

If you not watched CNN’s Special Report on History Being Made: The Legacy of Michelle Obama – please make the time:-

Taking it in on one last walk through the People's House. pic.twitter.com/uaAn6j8Ygy

Being your First Lady has been the honor of a lifetime. From the bottom of my heart, thank you. -mo pic.twitter.com/pahEydkZ5Z

Thank you sir for an EXTRAORDINARY 8 years.#ThanksObama #44ever #YesWeCan pic.twitter.com/sqoWzVmLaK