Vote for Entrepreneurs looking to VOOM with Branson

Many people have wondered what it would be like to work with Sir Richard Branson. It’s easy to imagine the advice and contacts that he would be able to share – and the number of doors that could be opened for a vibrant, young African-focused business. With VOOM 2016, Sir Richard’s people are listening to a record breaking number of pitches in order to pick the winners. Here’s our take on the campaign and a list of 5 Afro-centric projects that caught our eye in Voom2016, and which we encourage you to support!

Alongside a share of a huge prize pot worth £1 million – you will also be plugged into a huge network of influential and inspirational professionals, as well as the chance to apply for further crowdfunding as a ‘VOOM2016 Winner’.

Can you still apply?   Well the entries for 2016 have shut, but there will be a similar event next year if you want to start preparing your ideas.

In the meantime, on this graphic you can see which stage the competition is at now. 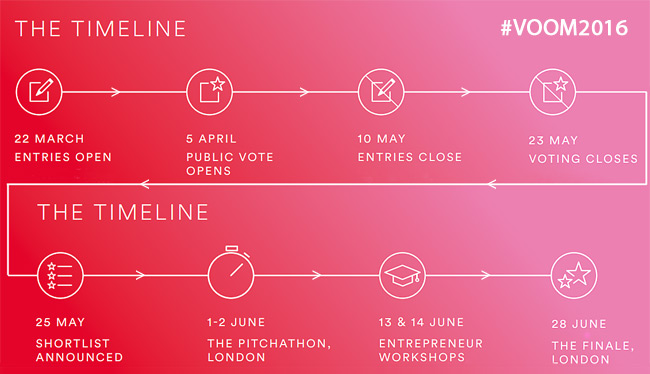 Africa Fashion Top 5
We have been through tons of projects on the VOOM 2016 web site and highlighted some interesting Afro-centric candidates. Take a minute to watch the videos and then we encourage you to cast your #Voom Vote…  before 23rd May!