Global Felabration for the Godfather of Afrobeat

Nigeria is undoubtedly blessed in many ways. Yes, that Nigeria. The most populous black nation in the world is endowed with the kind of natural/mineral resources – including crude oil – that many other countries drool over, in secret and in the open. Nigeria is also blessed with great human resources although this may sound hard to believe to some folks, especially considering the twists and turns in the socio-economic and political life of the country over the decades after independence but, then again, which nation doesn’t have ‘bumps’ in its own story? This October provides Nigerians around the world with a very special event to enjoy: Felabration!

All around the world today, Nigerians can be spotted excelling in several areas of human endeavour. With a population of more than 180 million, it is the most populous country on the African continent and the seventh most populous country in the world. Given the size of the population, it’s perhaps slightly less surprising that Nigerians should reach so many ‘firsts’ when it comes to looking at positive success in a number of different areas.

For Nigeria, the fashion, music and the entertainment businesses form one of the biggest positive economic drivers and exports. The Nigerian music industry has grown so big with its ‘tentacles’ now extended beyond the shores of the country and continent, to encircle the globe. None more so than Fela Kuti.

There are lots of Nigerian musical superstars that are now household names, and many are signed to international record deals, but have you ever wondered who was the pioneer? The very first person to achieve this feat in Nigeria?

While it’s possible to find notable singers and other musicians going back generations, the first musician to release an album was a special man indeed. The work that he began, is still having an influence, both inside and outside of Nigeria today. The Reverend (Yes… Reverend!) Canon Josiah Jesse Ransome-Kuti was perhaps the earliest person in Nigeria to compose gospel songs in form of church hymns. Interestingly, he’s the grandfather of Afrobeat legend Fela Anikulapo-Kuti and great grandfather of Nobel Laureate, Prof. Wole Soyinka. Very few photos of this important man survive to this day, but even in this small image you can see a strength of character in the eyes and pride in his bearing. 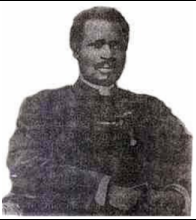 Records show that he composed songs as early as 1878, with his last known work to be released on 4th August 1921. He’s so iconic that his albums are still kept at the British Museum in the UK. He was a maestro musician, so much that the colonial masters nicknamed him ‘the Singing Minister’. Some of his works are still in use today, across various strata of society, without many people – including this writer – knowing the true history behind them.

Little wonder then that this same man was the grandfather of the fearless enigma Fela Anikulapo-Kuti.

Fela was mystical, fearless, uncompromising, independent and unapologetic about his beliefs and convictions – even in the face of the most fearsome opposition. Yes, he gave the world Afrobeat but, beyond that, he gave his all in pursuit of his mission ‘to effect a mental and physical liberation of the race’, as described so eloquently by his cousin, Professor Wole Soyinka.

Consider this: How many people can declare and ‘run’ their own ‘Republic’ within a country under a feared military regime? Fela Kuti did!

Several people still remember his ‘declaration’ of the Republic of Kalakuta. He was, and still is, a rallying point for those who wish to speak out against many negative things in today’s society. He was, and is still, regarded as one of the most iconic champions of human rights.

Fela himself wasn’t a saint, and never claimed to be, but he left many positive impressions on those close to him, the Nigeria in general and – indeed – the whole as a whole. Some legends grow weak over time, but the reverse is true with Fela Anikulapo-Kuti. Many of his words and songs from decades ago, had a prophetic edge to them, and we see them coming to pass even today.

Singer Mos Def summed up the maestro’s position in the music scene when he said, “Fela Kuti was James Brown, Huey Newton, Rick James, Bob Marley, Duke Ellington and ODB all rolled up in one black African fist”.

Felabrations kicked off for real this morning at Neca House Auditorium, Ikeja and the first of a week’s worth of concerts will begin at 8pm tonight at The New African Shrine – Fela’s spiritual home for so many years. This is an annual event, attracting huge crowds from across the globe to The New African Shrine – an official tourist destination of The Lagos State Government, who are key sponsors of the event – along with brands like 7-Up and Yamaha.

Here in the UK, tickets for ‘Late at the Library: Felabration‘, on the 16th of October in London’s British Library, sold out weeks ago. Here’s the man himself in concert, sharing his strong opinions about the female form with a captivated audience, “Dear Lady, show me your particulars!”.

Nigerians and Afrobeat lovers across the world often wonder what songs and actions they would have witnessed from Fela, had he still been alive today. Imagine Fela being around during the massive protest against the Nigerian Government during the petrol subsidy debacle or what his take would have been about Boko Haram bombings and kidnappings. Even beyond the shores of Nigeria, this writer is tempted to imagine what Fela’s mind would have come up with on issues like the politics/events in the Middle East and power game between Russia (Putin) and America (Obama). 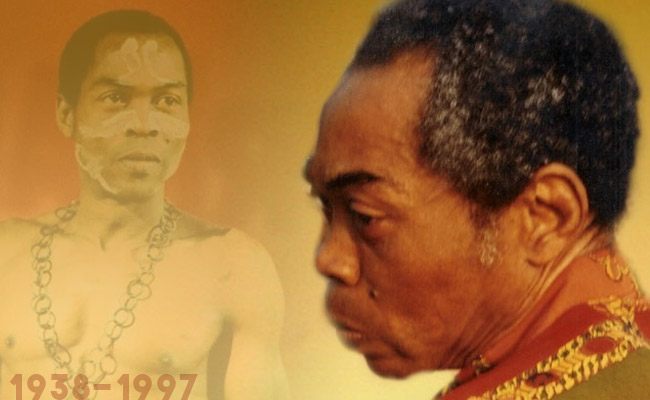 In his death, the movements he created have continued to grow stronger and break boundaries. His unique fashion style and sense can still be found around and the ‘Felabration’ event held every year have continued to be a resounding success just like this writer imagines this year’s version would be.

Fela continues to make waves to this day, through his highly talented sons Femi and Suen Kuti – the latter inheriting Fela’s band, Egypt 80 – and recently touring.

Wherever you are in the world, pay your own respects to the Godfather of Afrobeat music, Fela Kuti!