Anyone of African descent living in the UK, will know that African heritage has a variety of different identities  – and they all have stories that need to be told. Goldsmiths University has recognised that fact by launching the world’s first degree in Black British Writing. Africa Fashion examines at the importance of this landmark and what impact it can have.

Comparing the proportion of black people in the UK overall to the number of black professors in British universities, it’s clear that there is a huge under-representation. To achieve balance, we need to increase the number of black senior lecturers by close to 500%. And the problem looks like getting worse, before it gets better. Britain will be 30% BAME (Black And Minority Ethnic) by 2051.

The first step to fixing this issue, is understanding the problem in more detail. We need to know what gets taught and who is doing the teaching. In 2015, the Runnymede Trust launched a report on the subject – and an accompanying film ‘Aiming Higher: Race Equality in Higher Education’.

The film features Heidi Safia Mizra, Professor of Race, Faith and Culture at Goldsmiths College University of London. Heidi, one of the UK’s first black women Professors, put the situation in a nutshell:

“We’re not looking at the systems and the institutions – what we teach and why we teach in particular ways. We’re like dinosaurs teaching white knowledge as if the rest of the world isn’t happening”.

The film touches on a new award for education establishments: The Race Equality Charter Mark. Launching the first MA Black British writing is a great idea. This initiative from Goldsmiths will go some way to redressing the balance, which can help to ignite a passion in future generations.  Many leading authors have already come out in praise of the move.

“This is a landmark for British culture”, said journalist and author Hannah Pool, who has roots in Eritrea.

It’s clear that ideas, and the words we use to articulate them, can change the world. But if the words are not your own, then you need to question how the world is changing. An author’s words can quickly become a catalyst, challenging your own thoughts and assumptions. It is a vital communication.

“We write for the same reason that we walk, talk, climb mountains or swim the oceans – because we can. We have some impulse within us that makes us want to explain ourselves to other people”

Literature influences film and inspires the next generation. As such, it can have a powerful impact on music, culture, fashion and the concept of ‘acceptance’.

There is also the sense of origin, belonging and history that accompanies a deeper study of literature. Maybe, alongside modern greats like Malorie Blackman, Zephaniah, Ben Okri, Jackie Kay and Sissay (to name a few), young students will get turned onto playwrites like Bola Agbaje or novelists like Diran Adebayo.

We applaud Goldsmiths for creating this course. 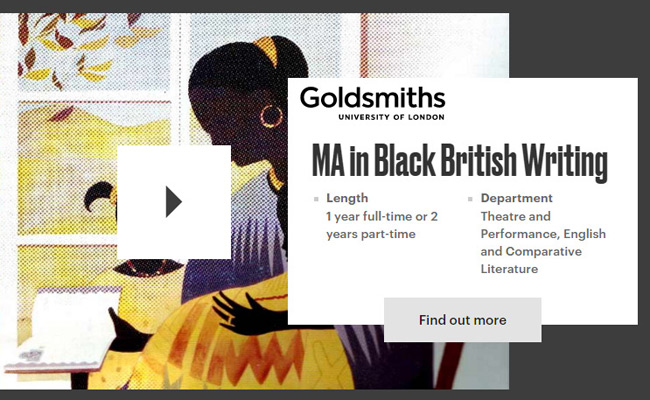 Previous Africa’s Next Top Model – Remember Roselyn Ashkar?
Next Threads Around The Web