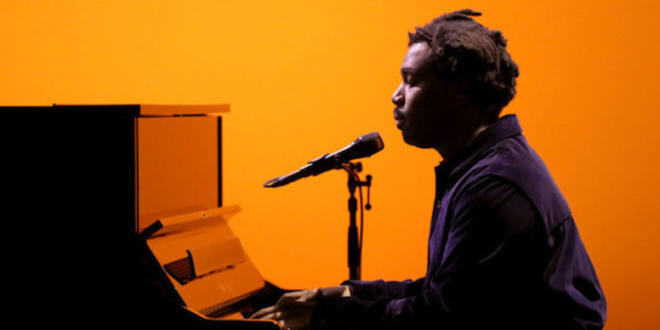 Since the announcement of Sampha’s debut album last year, the release date for one of the most anticipated albums of 2017 is fast approaching! The Process drops on the 3rd of February and available for preorder from his website.

Sampha Sisay, the British electronic music singer-songwriter and producer from South London, of Sierra Leonean descent has been an extremely influential and highly sought after collaborator. Working with numerous artists last year, but with an obvious favourite among us girls, especially those with #BlackGirlMagic, being Solange’s ‘Don’t touch my Hair’ – definitely one of 2016’s anthems that got played on repeat.

The soulful singer recently appeared on Jimmy Fallon show giving us another taste of what to expect from his new album, as both ‘Timmy’s Prayer’ and ‘Blood On Me’, have already been released as singles. With the release of his new single ‘(No One Knows Me) Like The Piano’, is a stripped down heartfelt ballad, with the song dedicated to his mother, speaking directly about the piano in his family home – and on which he wrote the majority of his debut LP.
1st verse –

With the 2nd verse highlighting the feelings about the death of his mother, who sadly passed away from cancer in 2014.

‘An angel by her side, all the times I knew we couldn’t cope
They said that it’s her time, no tears in sight, I kept the feelings close
And you took hold of me and never, never, never let me go
Cause no one knows me like the piano in my mother’s home
In my mother’s home’

this song is dedicated to my mother binty sisay. the more time that passes, the more i see the extent of her love for me. pic.twitter.com/yHuidtgNnW

Sampha’s headline London gig on the 29th March at the Roundhouse in Camden is now sold out. Other live UK dates see him visit Birmingham & Bristol.
Check his site for full touring details, where you’ll also find, European, US and Canadian destinations.