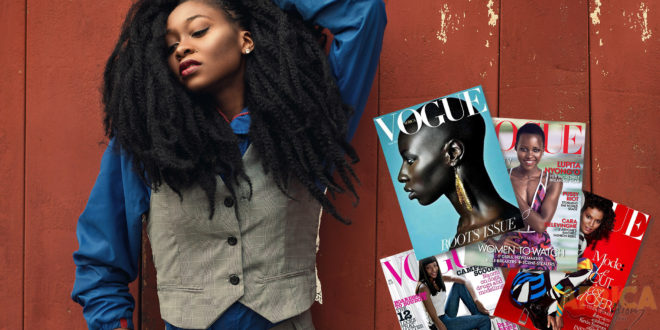 You can trust Naomi Campbell to kick off a conversation like no other model. As an established brand, Vogue will want solid market research before opening up fresh versions of itself into new markets. Having launched Vogue Arabia in 2016, will the appointment of Edward Enninful to run Vogue UK lead to a publication targeting Africa?  Were Naomi’s recent comments crafted to generate maximum feedback on the subject? Who will be the winners and losers if Vogue does follow Facebook and other brands to the second largest continent on the planet?

Enninful’s decision to recruit Naomi Campbell and Steve McQueen as contributing editors, was a powerful and positive statement that Vogue UK’s board were serious about giving the publication new life, new direction and élan.

It also means that he is free to explore new ideas and markets, with respected collaborators who understand the challenges and opportunities of the fashion world for people of colour.

Indeed, Condé Nast has been experimenting with various models, content and angles for a while now with its permanent ‘Black’ section of Vogue Italia online, called VBLACK.

““The only way they will not fail is by involving Africans in this front, back and center as writers, editors, designers, photographers, models, makeup artists, as advertisers etc.” https://t.co/rBZPwS32Fv

We all know that fashion is everywhere and that it permeates every community across the globe. Vogue’s target market is slightly different. The rich want to be seen as leaders. In order to have a following, you need to be ahead of the game and, love it or hate it, Vogue has been one of the most accurate crystal balls future fashion trends for 125 years.

Never has the expression, “Think global, act local” been so apt. The diversity of human culture means that to be truly successful in a local market, publications need reporters on the ground. Does that make sense in Africa?   A report on CNN in 2016 said that were almost 170,000 millionaires on the African continent – and that this number was will increase past 250,000 before the end of 2025. With those figures, Vogue’s traditional advertising base –  including Louis Vuitton, Valentino, Balmain and Gucci – will be comforted to know that sales won’t be a challenge.

Arguably, the most complicated issue will be, ‘How to fulfill orders for haute couture products’?

Reni Folawiyo launched exclusive store Alara in Lagos in order to capitalise on the $250m being spent annually by Nigeria’s elite on luxury goods. But with potential customers spread over more than 50 countries, there would need to be a much clearer route established between advertiser and consumer. Local online retailers like Jumia and Konga have managed to grow their businesses into multi-million dollar operations, but that is still a drop in the ocean – and it’s not the sort of market place where exclusive brands would normally want to be showcased.

It is often said that ‘Africa has a Nile, but it doesn’t have an Amazon’.

Even if Amazon established a massive network across the continent, you have to ask if that would be the right retail destination for the world’s most exclusive brands?

There are also arguments from established/local publications that Vogue has no place in Africa – and that the audience loves what is already being produced. But that’s what they have to say, whether they believe it or not.

There’s a Vogue China, India and Arabia. So why isn’t there a Vogue Africa? pic.twitter.com/57OsQx8DWq

African fashion is a wonderful and diverse thing – and you can see the ever increasing influence of African ideas on the world’s markets – but Vogue is not an art book. It is a commercial enterprise that offers exclusive brands a route to market. If there is no route for the goods to get to the customers, then that will be a challenge.

Given Naomi’s closeness to Enninful, we believe that this conversation has been kicked off for a reason and that there could well be a Vogue for Africa (in ‘Digital Publication’ format) before the end of the year.

If that happens, and the business model used for Vogue Arabia were repeated, then a print version could follow in early 2020.